I did not feel like a total idiot.  But there I was, halfway up a mountain in a Kodiak Bear Preserve, bloody and exhausted, clutching what little remained in the one small water bottle I brought on the trail-less hike. 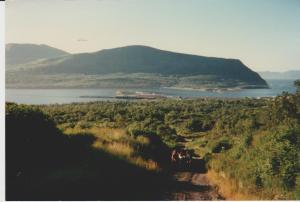 Six of us had started out together, but after an hour of hiking, the tangled masses of brushwood and the incessant bee stings became too much for three to handle.  They left claiming pain and possible allergies.  Wimps.

Boredom brought us here, into this rugged and relentless mountainside.  The cannery had no fish which meant no work.  We were stuck in a town that wasn’t even a town.  There was no main street.  There wasn’t even a road leading to somewhere else.  Coming and going was by plane, by boat, or by foot.  We had feet.

I was sitting on the rickety steps leading to my dorm, reading a letter from home that morning when someone asked if I wanted to go for a hike.  “Sure”, I said.  I put the letter in my bag and left.  One person pointed to the mountaintop, as if asking a question, and we all shrugged an indifferent agreement and headed up.  It was all very nonchalant.

But getting to the top took hours and by then our entire bodies were a mess of bleeding welts.  Our arms, our legs, and even our faces were shredded like we had been swimming through barbed wire. We cheered for ourselves for making it, but the victory was not wholehearted.   We each knew the peak was only a half-way point.  I wondered what those wimps were doing back at the Cannery.  I was envious of all of them.  This hike was a disaster.

I grew up in a city.  My family never camped.  ‘Wilderness’ in my neighborhood was what we called the 10×5 foot patch of dirt behind our garage.  We played there and felt untamed and free.  But I vividly remember sweeping the dirt.  Somehow, it was part of the game of wilderness for me; sweeping.  I had no business in this Alaskan forest.

Each new type of land had been a milestone to cross- getting through the bushes that were well over our heads, reaching the shrubs that hit our knees, and then arriving on the grassy top of the mountain.  We looked to the next obstacle to pass as we sat on that peak.  There were two options: attempt to go back down approximately the same way we came up with the barbed wire, the bees, and the immense piles of fresh grizzly scat or go down the other side of the mountain toward the ocean.  The latter headed even further away from the Cannery, but appeared to have less brush to wrestle through.  We stared down from the peak at the sheer, rock-covered cliff that we would have to descend. 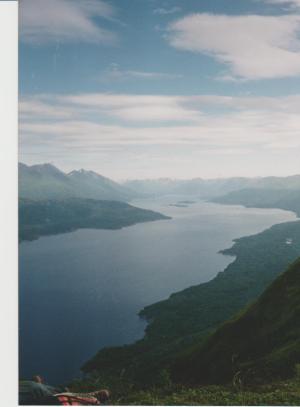 One by one, we slid down the gravely rocks until the first row of trees got in the way of our tumbling. From here, we couldn’t see the small beach that we would eventually get to, but we knew it was waiting for our beat-up bodies.  Once there, we would walk all the way around the mountain along the shore to get to our starting point; our boring and now very appealing home.

The patch of brush on the way down was equally as treacherous and sharp as the way up, but this time we didn’t make a sound as the edges ripped through our skin; we didn’t even try to stop the bleeding.  We just kept pushing our way downward focused on that beach.  But when we finally barreled through the last wall of razorblades, our precious little beach had disappeared.  Tides had stolen it.  Instead of the idyllic walk along the beach, we faced a new challenge: rock climbing.

I had just scrambled over the eighth shaky rock wall and I was perched on top of it looking down at the base of the ninth.  The ocean was crashing into the sides of it, frightening me.  It was a climb or drown scenario.  And I just stopped.   I felt like there was nothing left under my skin; my muscles were gone, my blood was dried up, nothing hurt anymore.  The appropriate reaction would be to cry or scream, but I didn’t even have the energy for emotion.  I just stared down at the rocks; empty.

We weren’t even really friends, the three of us.  We worked different shifts, maybe said hello to one another, but weren’t close.  I’m paralyzed on top of a rock cliff, they are ahead of me scaling the next pile, skirting around the narrow edges, about to fade out of view.  And I don’t care.  They call my name and I don’t respond.  They call again, encouraging me to keep moving.  The encouragement became begging, and then became screaming, “Stand up and Go, Tina!”

Alaskan summer nights are bright.  It was 10pm.  We had started our hike in the morning.  There was four hours before a true darkness set in.  The boys understood this.  Maybe they didn’t sweep a ‘wilderness’ in their backyard growing up.  They came back to me, still screaming, then begging, and then encouraging.  And with one ahead of me and one behind me, they herded me like a sick animal through the last hours of the climb.

When the rocks ended we were in a meadow of wildflowers.  It may have been the garbage dump or the plane runway, but I remember it as a meadow.  The sun was just fading when we arrived back at the barracks of the cannery.  I was still clutching my now-empty water bottle and had my arms around the shoulders of my two best friends.