I grew up in the middle of the city, in a 3 bedroom house with 11 brothers and sisters, and about 16 neighborhood kids my age that lived close enough that I could still hear my dinner bell from their yards. Our lives were ruled by two horrible things: that dinner bell and the street lights. Both signaled the immediate end of all fun.

I can picture us all happily running around the designated kickball backyard, and hearing the clang from that cowbell. It always seemed like our dinner was ready before everyone else’s was and this made me very irritable. My brother and I would pretend that we didn’t hear it. But the other kids just wouldn’t let it slide. “You better go home. That’s your dinner bell.” Whose side were they on? Everything, at that moment, becomes stupid, including my stupid friends who have just pointed out the obvious stupid bell to us. Don’t take this lightly, ‘stupid’ was the absolute worst insult one could dole out to something. “Stupid’ was the biggest gun we had back then; the closest thing we had to a swear word. But the kickball game was totally at a stand-still, everyone staring at us in disbelief that we were still there and the bell had been rung! Our faces turn into the mixed emotion of anger and destitution, our shoulders sag heavily toward our hips, and our little heads of unbrushed hair swiftly drop downward to the ground, as if pressed on by the weight of the world.   My brother and I would kick the ground and slowly, angrily, shuffle our filthy little bodies all the way home, 4 houses away, heartbroken, as if headed to a punishment, instead of a plate of hot spaghetti. This happened every night. 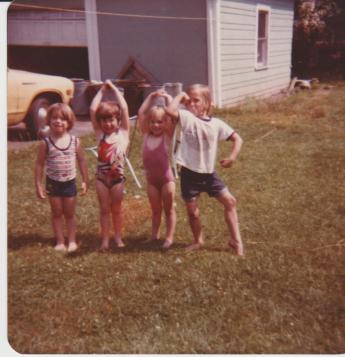 The homes on Arnett Blvd. were nestled up next to one another, with thin driveways in-between, each family with one solitary tree out front. Denise’s was the only one worth climbing. I can still picture the two giant branches that were low enough to grasp onto and big enough to sit on. That was Denise’s claim to fame; her tree. The Keller’s had the kickball yard. Our front sidewalk was usually the hotbox field.  The Schramm’s had the hide-and-go-seek front porch, which we used for all variations of the game, including sardines and our version of ‘ghost in the graveyard’, which we called ‘bloody murder’. That one was a favorite for us kids because we could run around the yards screaming ‘Bloody Murder!!’.  We never got in trouble for that game and never were told to stop playing.  This still baffles me.

‘Wilderness’, in my city neighborhood, was what we called a 10×5 ft. patch of dirt behind my family’s garage.  There was a sense of deviancy back there; a feeling of risk and adventure, even though we were barely out of earshot of our parents.  Back there, behind the garage, we were wild and free.  This is where the big kids went to be bad, we knew this. We could do anything we wanted.   But we were still made of sticks and stones; sugar and spice. We didn’t exactly know what to do to be rebellious in the emptiness. Sometimes we just stood back there doing nothing, yet feeling proud and strong, like pirates who had successfully stolen a treasure. But usually, when I was deep in that tiny wilderness, I would get a broom and sweep the dirt.  Somehow, this was the logical thing to do for me: sweep.

People like to say how life was simple back then. Not us. Life was complicated. There was not enough time in the day to eat or sleep, so avoiding those things was a very high priority.  It was also vitally important to race. We could be walking to the bathroom, to the phone, even to the dreaded dinner table, and we would have to race. I don’t remember winning any races, ever. Mostly because a classic race usually involved some degree of technical wrestling skill. If the other runner advanced an inch ahead of you, it was imperative to grab one of his limbs- ideally, the leg, but if necessary, or the leg is unreachable, an arm could be sufficient. While these are the standard rules, mostly what we did was grab the back collar of the t-shirt and yank, which really wiped a winning grin right off of their face. I cried a lot. And my brother Danny’s t-shirts had very overstretched collars. 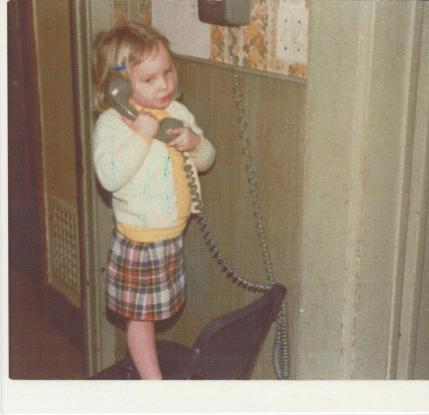 Danny had the proud distinction of the “y” sound at the end of his name, which most of the kids in the neighborhood had.  I was one of the few who did not, but I did have an official Mr. Schramm nickname, which made me feel like I WAS somebody.  Even when he would use that nickname to tell me to join his kids in doing some chores around their house, like cleaning up after the the dog, Black Jack.  But because I was ‘Tina the Ballerina’, I could handle a little dog poop.  This wasn’t strange to us to have to do chores at other people’s houses.  And if you happened to be at the Keller’s, you might even get a cold hotdog for all your hard work.  Mr. Keller worked at the hotdog company and I always felt like their entire fridge was loaded with them, like a cold shrine of deliciousness.

Since sit-down meals were such a hassle, snacks were of utmost importance.  We could rate eachother’s homes by its choice of snacks.  While the cold hotdogs were obviously pretty tough to beat, the Case’s were hands-down the most luxurious snack distributors on the entire block.  They were the first to get fruit roll-ups, and unlike at our house, they weren’t specifically allocated to school lunches, and certainly weren’t the generic kind.   They were authentic, name brand Roll-ups, which were surpassed only by the other treat that really sealed the crown for the Case’s: Doritos.  Truthfully, I may have only had these treats once, but even so, the Case’s climbed the golden ladder of snackdom so high that no other family could even get close.  It also gave me the impression that they were filthy rich, which was a bonus for me, because I got all of Julie’s hand-me-downs.

6 thoughts on “We’re the Arnett Gang of Rochester, and if you have money, buy me a fur.”